As many of you may already know, the last couple years have brought some big news regarding Idaho’s salmon and steelhead, and the main challenges they contend with for survival and stock recovery.  A little under two years ago, Representative Mike Simpson of Idaho’s second district unveiled his Northwest in Transition Columbia Basin Initiative plan that proposed a retirement of the four Lower Snake River dams, along with significant investments in power systems, river communities, industry infrastructure, and more.  Again, this is a recap for most, but the retirement and breaching of these four dams is considered by an overwhelming 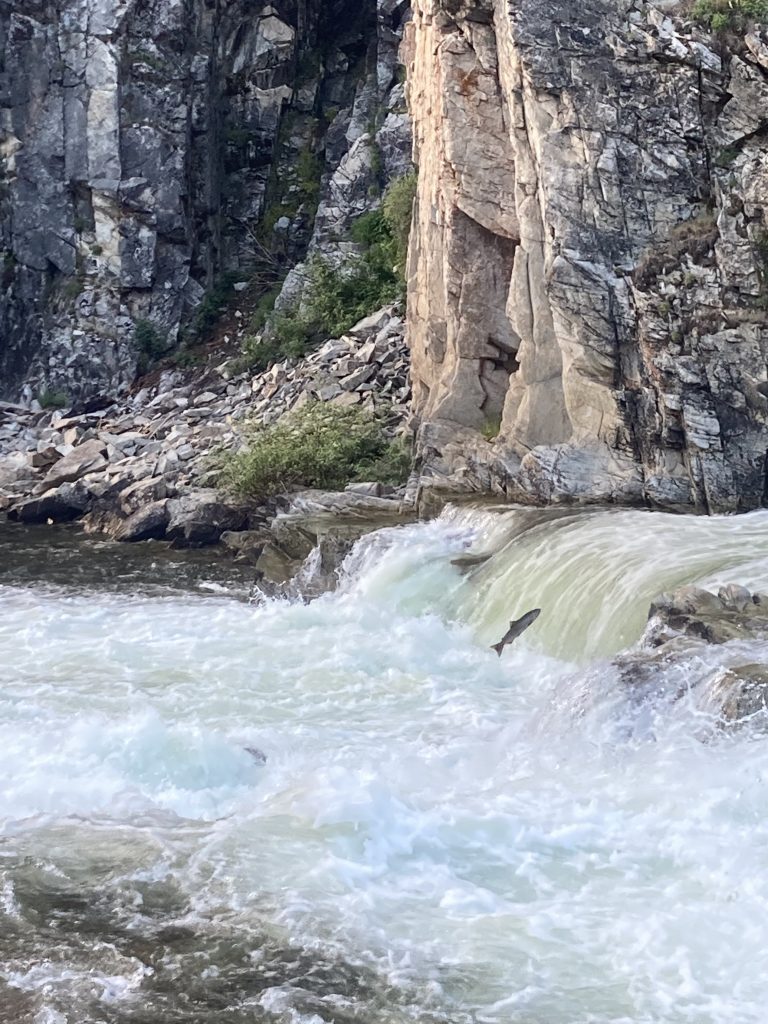 majority of fisheries scientists to be the single action with the most potential to recover Idaho’s sea-run fish to stable populations.  IOGA supports the breaching of those Snake River dams, but not at the cost of the livelihoods of those who depend upon them.  Simpson’s proposal covered this base, provided funds and opportunities to offset each hardship posed by a potential breaching, and gave us a plan we could whole-heartedly support.

This was, of course, fantastic news!  A great many individuals, industry organizations like ours, the outfitters and guides of whom we’re comprised, nonprofits et al were re-energized to continue efforts to bring healthy runs of fish back to our rivers.  We all took deep breaths and waited, kept spreading the message of abundant salmon….and waited. We waited some more.  In the ensuing year-plus, what exactly happened on this front? Where did the Columbia Basin Initiative go? Will the dams be breached, will the lower Snake run free, and with it the salmon so many Idahoans depend on for work and play?

Well, to answer that first question, a lot happened, and in a way, not much.  Political reactions to Rep. Simpson’s plan ranged predictably along party and stance-based lines from enthusiastic support, to skeptical neutrality, to outright condemnation.  It was hoped that the CBI would attach to an infrastructure bill that loomed in Congress for months, and that didn’t happen.  In fact, the CBI lacked quite enough support to be written into legislation, and remained a proposal.

Initial skeptics of the CBI, Washington’s Governor Jay Inslee and Senator Patty Murray cited needs to more completely understand the feasibility of replacing the power and industry infrastructure that relies on the LSRD’s before a plan to retire or remove could be considered.  They commissioned their own study, to be completed in June 2022.  Glass half-empty view: a can kicked further down the road. Glass half full view: at least key political figures in the NW are giving the idea a thorough study.

Everybody at the ballpark is there to see their team hit a home run, right? Well, we were a little disappointed with this one, no home runs in the offing. The Murray/Inslee report acknowledged that breaching the lower Snake dams was the best option for salmon recovery, but explicitly declined to recommend breaching at this time, citing the high cost (estimated 10-27 billion) of dam removal and industry infrastructure replacement and reinvestment.  Their conclusions called for, among other things, more analysis.  Consider that can kicked; the study was a mixed bag for salmon recovery advocates at best. On a bright note, the report did acknowledge that all the industrial and economic benefits provided by the LSRD’s are replaceable.

Right after the Murray/Inslee study was finished, but before its recommendations were released, the Biden administration’s Council on Environmental Quality released a statement recognizing breaching the dams as the best option for salmon recovery.  At the same time, the National Oceanic and Atmospheric Administration’s Fisheries division (NOAA Fisheries) released its own report recognizing the same.

Since then, the radio’s been fairly silent on high-level discussions of salmon recovery.  This doesn’t mean that it’s faded from the attention of political and ecological organizations and individuals, and doesn’t mean there’s no work being done.  Plenty can be done from a state of limbo.  Instead, it seems that political momentum has stalled a bit.  For difficult issues like salmon recovery, which necessarily involve region-wide paradigm shifts in affected industries and economies, momentum definitely needs to be actively maintained.  We, as outfitters and guides, can help with this- and i’ll speak more about it a little later. 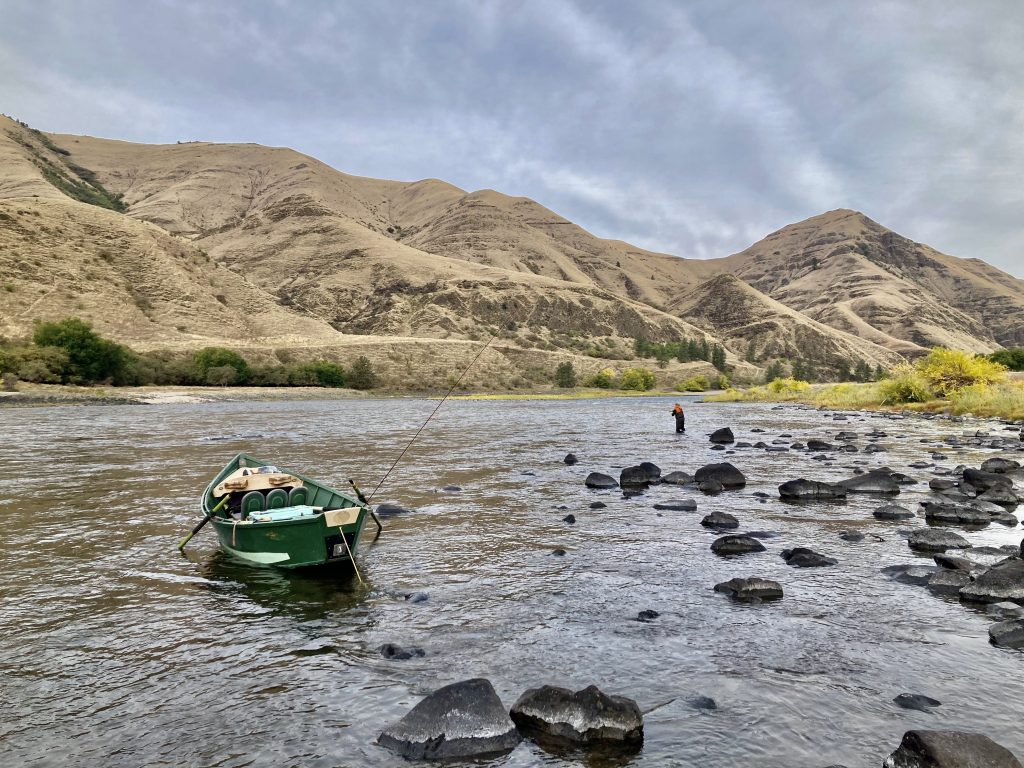 In the meantime, what happened with Idaho’s salmon and steelhead runs? Much like the studies and reports concerning their future, the relative health of fish returns this spring-to-fall was a mixed bag.  Early counts coming over Bonneville and Lower Granite dams were encouraging, by the end of summer they were more concerning, and by the middle of fall they were right about what was predicted early on.  Specifically, Chinook salmon and steelhead counts were better than their 5-year averages, but worse than their 10-year averages.  Sockeye salmon returns experienced their best year in a decade, as 736 salmon made the journey to Redfish and Alturas lakes outside of Stanley.  On the mixed bag front, however, only 43 of those came from parents who spawned in the wild.

As anyone on the water this fall knows and could tell you, these numbers have translated into the sort of season on the water you’d expect them to:  numbers of fish are definitely more encouraging than the last five years, but are nowhere near what we were used to before that.  More importantly, they’re far from truly ecologically healthy.  We’re observing a small uptick, and overwhelmingly likely NOT a recovery trajectory.

This isn’t to paint a picture that’s entirely doom and gloom; I think there’s an important bright point here, and that is that Idaho’s sea-run fish (and especially the wild ones) are tremendously, and impressively, resilient.  In the face of huge mortality factors on the way to the ocean, while in the ocean, and on the way back upstream, they managed to resist all the adverse conditions and regain a tiny sliver of abundance.  The implication there, I believe, is that given a path to the ocean that’s 50% less impeded, they’ll take advantage of it and thrive.  To state it clearly, we still wholeheartedly support a comprehensive plan to remove the four LSRD’s and invest in and make whole the region’s industrial and agricultural economy.  At least that’s stayed the same.

So as outfitters and guides, what can we do to keep up the political momentum, keep our leaders’ attention on Idaho’s salmon and steelhead, and keep working toward the ecological restoration that we know would result from the salmon’s return? For one, keep writing - to your congresspeople, local newspapers, and even to your guests. Be assured that your letters and comments are read and noted.  Some congresspeople, to be sure, are more receptive than others, but hey- in a representative democracy, they’re required to take your viewpoint into account when making decisions and crafting policy.  Whether they actually do this or just pay lip service, they can only truly make decisions based on their constituents' viewpoints if they have those viewpoints to read.

For another, I’d like to point out that as outfitters and guides, we have a very powerful tool for connection and message amplification at our disposal any time we’re guiding, and it’s ourselves.  We interact with dozens, and in most cases hundreds, of outdoors-minded people each guiding season.  They’re visiting our wild places, at least in part, for a deeper connection with those places.  While we facilitate those connections, we can tell the story of salmon, steelhead and rivers, and show each guest how important it is that those things stay together and contribute to each other’s health into perpetuity.

Of course, peoples’ opinions differ, and though the science we’re citing when supporting dam retirement is robust, peer-reviewed, and clear; not all people we interact with will agree.  Some guides and outfitters might feel uncomfortable with straightforward and overt assertions of support for the breaching option the IOGA supports, and that’s a decision each individual gets to make.  For those who are comfortable, or even enthusiastic about spreading the message, we’ll have some deeper and more focused ideas (potentially, trainings) about how to do so that we’ll be developing through the winter.  We’ll be updating this blog with those, and posting facts and stories here and on social media to maintain some attention on this issue. 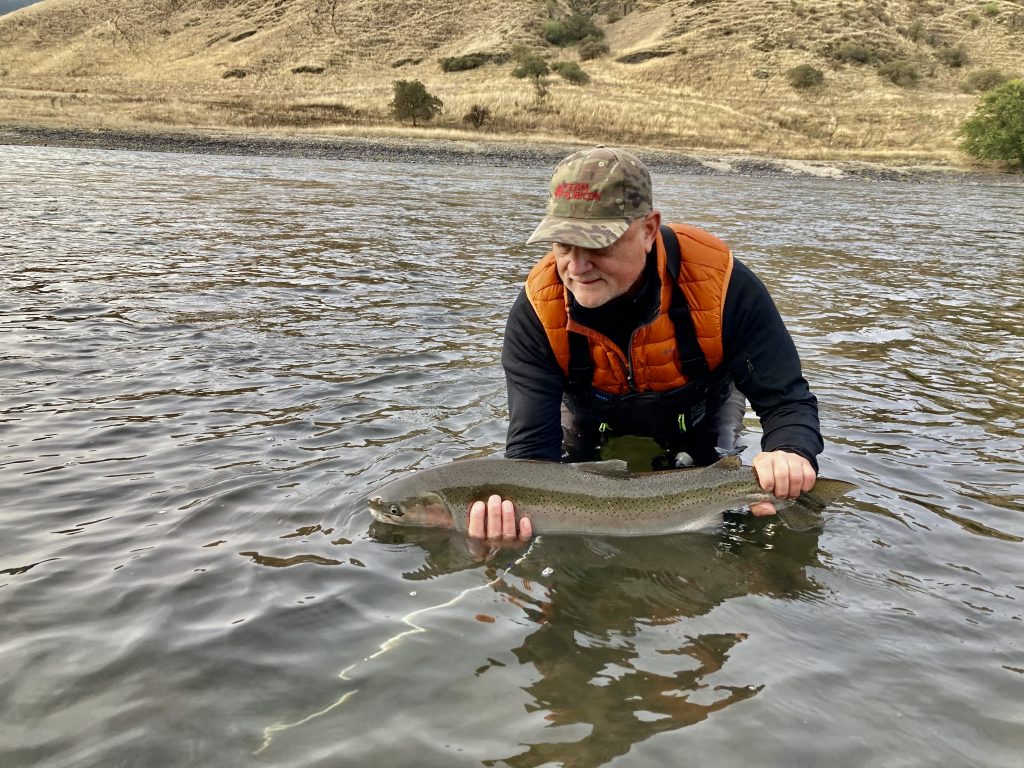 Personally, I guided flyfishing trips, and fished myself, for a good chunk of this October on the Salmon and Clearwater.  In terms of material fishing success, it matched the theme I’ve been working with for several paragraphs here: all over the map.  Strikes and gutters.  Win some, lose some.  There were weeks on end where steelhead made us work incredibly hard for each bite and fish hooked.  Other days, we stepped into the runs I knew were good, and were rewarded with grabby fish as if feeding them a fly was easy as falling off a log.  Or falling off a slippery chunk of basalt into waist-deep water, as it were.  To a great extent, this is nothing new about steelhead or salmon fishing:  you amass knowledge and techniques that swing the odds of success in your favor, but kind of like cribbage, the fish (cards) show up or don’t (are dealt in your favor or aren’t) according to so many other factors that we can’t control (how well did the dealer shuffle?).  Just because the odds might be stacked against you on any given day, doesn’t mean you stay home!  The point being that our efforts to enact the salmon-restoring solutions we’re supporting are no different than our fishing for the fish themselves.  The best thing we can do is to keep casting our lines into the water, knowing that success requires effort and effort requires some measure of optimism in the face of adversity, inertia, even apathy.  So stay tuned, and in the coming months we’ll figure out some ways that we can keep casting those lines together.